So we had an “Active Shooter” training at my office on Friday. The idea was to make sure we know what to do if and when someone starts shooting up one of our schools. The entire district office was in attendance. Many of these people never go to school sites; others are there on a regular basis. The presentation was delivered by a San Diego County Sheriff’s Deputy.

I found the entire presentation to be infuriating. By the end, I was sick to my stomach with rage. It was completely inappropriate and counter-productive to have this law-enforcement officer present to educators. All it did was inflame and frighten our district office employees while perpetuating some pernicious and dangerous ideas about law-enforcement. In this post, I want to point out the problems with this presentation, work through some of my own thoughts, share some of the slides and images used, and finally make a couple of suggestions of how we can effectively help teachers and staff.

Here are the first two slides from the presentation. (The slides were shared with us after the meeting by our district office.)

Pretty much gives the lie to the officer’s often-repeated disclaimer that “I’m not here to scare you.” Who’s at risk? EVERYONE!!! Where will (not “could” or “might”) a shooter strike? ANYWHERE!!!

I absolutely love the final bullet point here. If there’s a shooter at your school, it’s your choice if you live or die. If you get shot and killed, you should have done something else. I guess those kids at Sandy Hook just didn’t want to live badly enough.

Then we come to the “best” part of this whole shitshow. 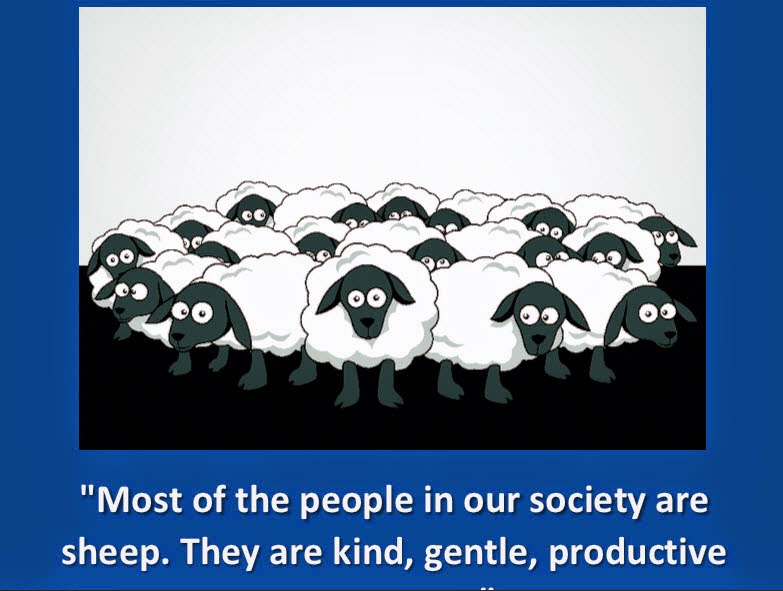 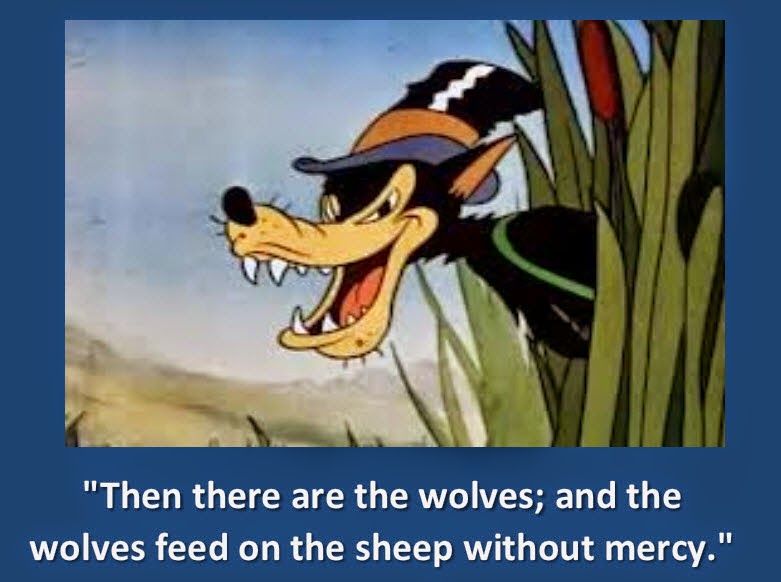 The officer presenting this to us tried to deny that the characterization of most people as sheep was not meant to be derogatory. This is clearly bullshit, as he repeatedly asked us at later points, “Do you want to be a sheep or a sheepdog?” He emphasized that the “sheepdogs” in this analogy are law enforcement, military, and teachers who protect their students.

Where to start with the utter stupidity of this metaphor? Wolves don’t feed on sheep without mercy, they feed until they’re not hungry. They’re not evil monsters who kill for inexplicable reasons and must be eradicated. They’re part of the food chain. They’re eating.

Furthermore, wolves and sheep and dogs are different species. Are criminals, victims, and law enforcement different species? I would suggest that many law-enforcement and other tough-on-crime types think that’s true. But all that kind of thinking does is make it impossible for you to understand why the wolf is killing sheep, or why the criminal is committing crimes, and therefore makes it impossible for you to effectively prevent or respond to the events.

This idea that there are “sheep” and “wolves” and “sheepdogs” is not only stupid but pernicious. If you have the mindset that there are “wolves” out there who are simply bad people with the desire to destroy and kill, then you think about your job very differently than if you realize that all people have strengths and weaknesses and may act unpredictably in stressful situations. It’s an “us vs. them” mentality, a “thin blue line” philosophy, and at bottom it is a “fixed” mindset: “Some people are just bad.” And it is 180 degrees opposite from what I and any other dedicated educator MUST believe about all students. We have to believe that all students (and all people) come with strengths to be leveraged and weaknesses to be improved. If you’re an educator and you don’t believe that, find another fucking career. If you’re a law enforcement officer and you don’t believe that, you’re part of the fucking problem.

Taken to its extreme, this “thin blue line” mindset leads to the over-militarization of civilian police forces that we have seen so much this summer in places like Ferguson, Missouri. Law enforcement personnel are supposed “to serve and protect” all citizens, not just the “sheep”. Furthermore, setting yourself up as “sheepdogs”, or protectors of the sheep, sets you apart from the “sheep”. Aren’t the people who work in law enforcement part of the public who are being protected? Or are they separate, above the mere “sheep”? The inclusion of this image in the presentation says volumes about how this officer sees himself: This kind of attitude has no place in either education or in law-enforcement.

The next part of the presentation was to set up the choices that we have when confronted with an active shooter: run, hide, or fight. There were actually some useful kernels of information embedded in the flood of shit here. For example, don’t skip calling 911 just because you think others already have; every caller contributes different information, and the dispatchers can paste all that together to get a better total picture of the situation. Also, the officer made a useful distinction between “cover” and “concealment” when hiding from a shooter.

And then we get to “Fight”: 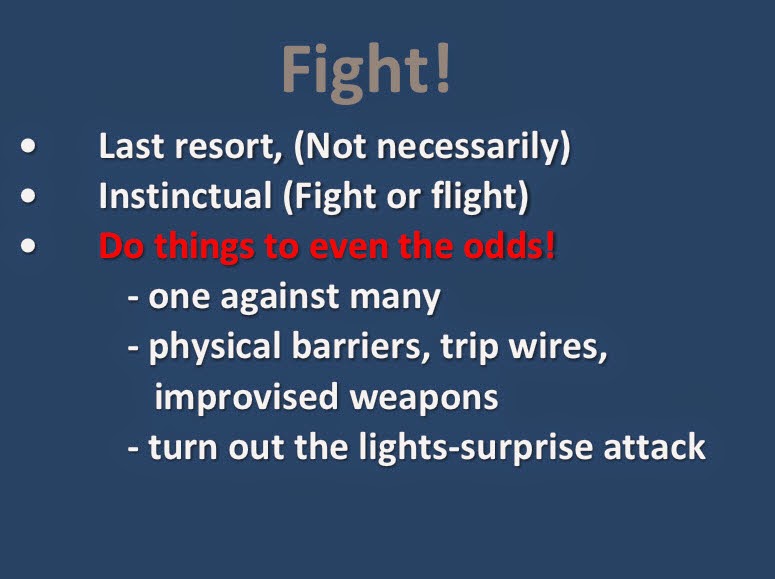 Notice that “Fight!” is (not necessarily) the last resort. “I’m not here to tell you you have to fight,” the officer repeatedly lied to us.

This slide was followed by an eight-minute video of an Israeli expert teaching a class of (what looked like) college students how to take down an armed intruder who bursts into their classroom. They learn how to move furniture to impede firing lines, how to hide at the side of the door, how to take out intruders by tackling them at the knees, and other paramilitary tactics. And my reaction while watching this was “Are you fucking serious?!?”

First of all, we are a grades 7-12 district. You want us to teach 12-year-olds to take down an armed intruder? Fuck you. I have been in lockdowns before (nothing serious, thankfully), and the single most pressing thing a teacher has to do is to keep kids calm.

Secondly, the underlying assumption of Mr. Paramilitary-Training-Dude is that “Bad guys are around every corner.” According to the video (and the officer presenting to us), you have to be aware at EVERY MINUTE that someone could be coming to kill you. He encouraged us to always(!) be aware of potential exit routes, who is around you, who is coming and going, so that you are ALWAYS ready to… to what, I’m not sure. Turn into fucking Rambo, I guess. Seriously, the officer encouraged us to take five minutes every morning to think about what we would do in an emergency and to plan out our strategies. All that would do is turn teachers into raving paranoiacs. (Oh, I suppose it might also scare them shitless and therefore predispose them to vote for tough-on-crime politicians who would cut social spending and give more money to law enforcement. Huh. What a coincidence.)

What Are The Odds?

The rest of the presentation was about law-enforcement response to active shooter situations, and again had a couple of reminders that did not make me want to throw up. It was actually useful to hear a little about police strategies and how we could best stay out of the way. By this time, however, my head was about to explode, and I got to thinking about how this officer was presenting this to us like it could happen any day. And yes, it could. But what are the odds? So I started looking up statistics with quick Google searches on my phone. Here’s what I found:

One in about 8 million. Hmmm. How does that compare to other types of risks?

One in 700,000. When are we going to institute “active lightning” training, since the odds of our students getting hit by lightning are more than ten times greater than being shot at school?

Additionally, who would be doing the shooting? It is far more likely that any “active shooter” on one of our school campuses would be a student at that school who has reached a breaking point, rather than a random stranger. It follows then, that we would be better off providing resources to support students’ mental and emotional health and to identify students in despair, to prevent a tragic occurrence before it happens.

How Could This Have Presented Better?

This officer kept saying things like “I don’t want to scare you,” and “I’m not here to scare you.” I call bullshit. That was exactly the point of the presentation – to scare us.

I also call bullshit on the disclaimer that “I’m not here to tell you that you have to fight an intruder,” and “You have to choose for yourself what to do.” These were lies, exposed by this officer’s other (passive-aggressive) statements that “You can choose to be a sheep or a sheepdog,” or “You can be a sheep and lay down to die, or you can fight back.” This officer (and by extension our district personnel who invited and sponsored him) was clearly advocating that we attempt to teach 12-year-olds paramilitary tactics to take down the intruders who are always lurking around the corner, waiting to invade.

As I mentioned above, there were a few nuggets of useful information. I contend that the useful information could have been presented to school staff members in about 15 minutes, without the scare tactics and bullshit social theorizing and law-enforcement puffery. But that would have to be done by an educator, not by a sheriff’s deputy. Furthermore, that could and should be done in the context of a schoolwide comprehensive emergency plan, including what to do in case of fire, earthquake, or other unexpected situations. To have an hour-long presentation by a sheriff’s deputy who thinks he’s John Wayne, Clint Eastwood, and Rambo rolled into one was simply inappropriate, counter-productive, and offensive.